In this article, we have discussed the increased cancer risk due to tanning beds, especially among young people.

Getting a tan is quite popular among the younger generation, especially teenagers and people in their twenties. It is a way to look fashionable and trendy. A shortcut method to look wealthy. But it has some severe adverse effects on the skin. Indoor tanning is a multibillion-dollar industry. Despite all the evidence and research regarding the adverse effect of indoor tanning, the industry is marketing tanning beds as having more benefits to the health than health risks. The indoor tanning industry even claimed its caner causing effects as false propaganda. What Are Tanning Beds?

Indoor tanning uses a device that emits ultraviolet rays to provide cosmetic tan. They consist of several fluorescent lamps that emit ultraviolet radiation having a wavelength between 200nm to 400nm to give a tan similar to the sun. These tanning beds require special controlling for the dose of UV rays they release according to the FDA.

If not controlled, it could lead to lifelong health issues.

When & Why Did Tanning Become Acceptable? A Brief History

Before industrialization, people used umbrellas, protective clothing, bonnets, and hats to protect themselves from the sun. The people with freckles and tan were considered as poor as they usually worked on farms, outdoors. With industrialization, people started working in mines and indoor factories with less exposure to the sun. Children started having bone deformities due to their living conditions. Hence it was finally discovered that sunlight is important for the proper development of the human body.

Light therapy or light bath came into existence in the 29th century. In 1903, Niels Finsen used phototherapy to treat skin ulcers. He won the Nobel Prize for this research.

In the 1920s, the sun-kissed glow or tanned skin came into fashion by Coco Chanel. After her photographs surfaced with too much tan, women rushed to get a similar look.

Two types of UV rays get passed through the ozone layer. These are:

Tanning Beds Can Cause Cancer?

It is quite common among women to tan themselves to look good. Particularly younger girls in high school tan themselves through indoor tanning to stay in fashion. But little do they know that younger people are at a higher risk of skin cancer especially Melanoma due to tanning beds or lamps as they are more susceptible to the carcinogenic effects of Ultraviolet (UV) rays.

Indoor tanning causes greater damage in a short period than long exposure in the Sun because the dose and intensity of UV rays are far greater and dangerous. Despite claims of controlled dosing of UV rays by the indoor tanning industry, high-pressure sunlamps are used by regular tanners which receive approximately 12 times more dose compared to the annual dose received naturally by the Sun. According to an estimate, 10 minutes of exposure in a tanning bed has the same cancer-causing effects as 10 minutes of exposure in the Mediterranean Sun.

It has been observed that tanning beds can increase the risk of getting melanoma by 75%. This increase can occur by one indoor tanning bed session before the age of 35.

Despite the increasing use of tobacco and smoking, it is a fact that more cases of skin cancer have been reported all over the world as compared to lung cancer.

As opposed to the popularity of the glow of tanned skin, it is evidence of injury to the DNA of the skin which can start carcinogenesis. Tanning can cause visible signs of aging at an early age and cause cancer.

Long exposure to tanning beds can also cause premature aging of the skin, permanent damage to the eyes, wrinkles, and solar keratosis.

There is a misconception created by advertising agencies and tanning industries that tanning beds can provide the required Vitamin D to the people. We should get one thing straight, tanning beds are not a good source of Vitamin D. UVB is responsible for providing Vitamin D, whereas tanning beds mainly release UVA, which increases the risk of skin cancer with every session.

Melanoma is the deadliest type of skin cancer and has caused 9000 deaths in the USA alone, each year, according to CDC. Formed in the pigmented cells of the skin. It attacks the cells that make pigment (melanin) called melanocytes. It can also affect the eyes and sometimes inside the body like in the throat or nose etc. Melanoma can occur in people with any skin color. There have been extreme cases in people with both fair and dark skin tones.

It is caused due to the overexposure of Ultraviolet (UVA) radiation. These could be directly through sunlight or indoor tanning beds or lamps. Melanoma is produced on the parts of the body exposed to the Sun such as the face, legs, arms, etc. In addition to this, melanoma can also be produced in areas less exposed to the sun such as the sole of the feet, fingernail beds, etc. This type is more common in people with darker skin.

It is advised to take the daily dose of Vitamin D through natural sources. This can be through certain foods that contain Vitamin D such as Cereals, fish, and dairy products. People can also take a Vitamin D supplement to meet their daily requirements. There is no denying the fact that tanning beds increase the risk of skin cancer especially among the younger generation and it should be avoided. Fake tanning products can be used to provide the desired glow and tan. Precaution is always better than cure. Governments need to make laws to save the youth from a deadly ailment. 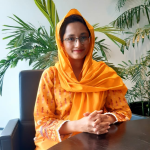 I am an electrical engineer from NED University, currently working in the oil and gas industry.
I have worked on projects related to power generation, distribution, C++, and python programming. I am an avid reader and love to read mystery, fiction and fantasy novels, always on the lookout for something new.